Of late, we have been diving into some work put out by the Ivey Business Journal.  In our last post, we 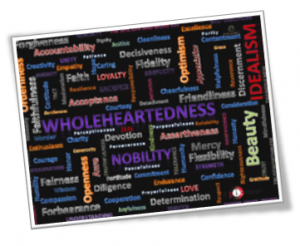 looked at an element of that work that questioned the strengths of leaders with respect to:

Do they have the character to be a good leader and strive to be an even better one?  Do they have the values, traits and virtues that others – shareholders, employees, customers, suppliers, regulators and the broader society within which they operate – will use to determine if they are good leaders?”

And we suggested setting a personal Trustworthiness Mission Statement,  looking at an example:

I serve my colleagues, customers, clients and all constituents by earning their trust every day through:

We finished by saying…, Most importantly, use language that you know you are prepared and committed to honoring every day.  Every Day.  EVERY. DAY.  Then set some clear and measurable actions that you will take daily to make it so.  Trustworthiness is indeed the “means of attracting confirmation and prosperity”.

In the original article, it addressed why this even matters.  To quote the piece…

Yet character is such a central, important element of leadership — particularly for the kind of cross-enterprise leadership that is essential in complex, global business organizations — which it should not and cannot be ignored.  Character fundamentally shapes how we engage the world around us, what we notice, what we reinforce, who we engage in conversation, what we value, what we choose to act on, how we decide…and the list goes on.

Our own research on the failures of leadership points to issues around character as a central theme[3].  Nowhere was this more obvious than in the financial crisis of 2008 – 2009, in which boldness or instant gratification triumphed over temperance.  People who knew that bad risks were being taken did not have the courage and/or confidence to speak up, and people without integrity sold mortgages to those who could not pay them.  They then bundled these mortgages into securities that were fraudulent and sold to others.  People with large egos, lacking in humility, oblivious to the harm they may have been be doing to others or the societies in which they operated, became very rich at the expense of millions who were the victims of the financial crisis and subsequent recession.  Yet, to this day, these same people seem unable or unwilling to accept any degree of responsibility for their actions.  Leaders of large, global companies knew about these types of practices yet did nothing to stop them.  Still others were unable to create the honest, transparent corporate culture that would enable them to be in touch with what was happening deep down in the organization.  All these behaviors and activities were, essentially, failings of character.

When Dale Carnegie first researched for his book How to Stop Worrying and Start Living in the first half of the 20th Century, the story goes that he went to the New York City Public Library and found no books on worry, but plenty on worms.  We are almost at that place with character.  Almost.  There is growing attention to the topic but in many ways… it still appears adjunct in nature.

So, here is our next bit of homework.

What is the clear and certain return on investment of building character in your school, workplace, business or community?  Make a grocery list of the tangible reasons for advancing character as foundation to your culture.  How would it impact sales, revenues, effectiveness, efficiencies, excellence, academics, quality, trustworthiness and more amongst your colleagues, classrooms, clients and all constituents.

Get clear and real on this, and we will pick up the study next week; examining some strategies for building same.

Barry is ultimately a strength coach.  His work is about exploring, identifying, practicing and

mastering our strengths and building upon them through practical and powerful unity and resourcefulness.  That is why Barry is The Unity Guy™.  EPIC Engage™ is an extension of The Unity Guy™. The Epic work is all about building strong, united and inspired cultures lead by character… at school, work and community; where everyone matters and contributes everyday.

Our work is all about character. We go beyond behaviour to help build character driven, united, and resourceful organizations and communities around the globe.  As part of that work, we offer you …